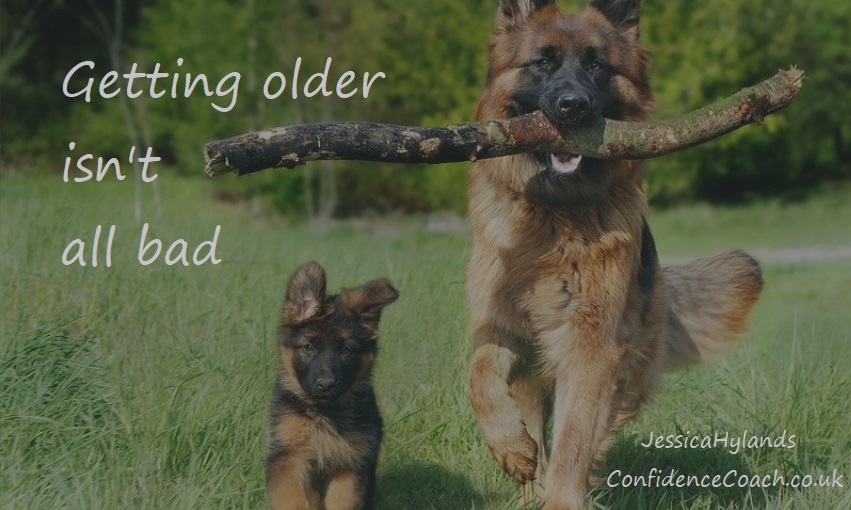 You can carry big sticks for a start

How are you finding your 50's?

For some it is a joyous time, but for others it's a challenge.

If female, you may be dealing with the menopause as well, which makes everything that much harder.

Indeed if you're male and your partner is going through the menopause it may well be having some effect on you.

There are lots of reasons that we might find this age a challenge.

Hopefully this video will give you some tips as to how you can turn things around and enjoy it!

As ever, do get in touch if you'd like any help.

So you’ve reached your fifties and Welcome!

Are you happy about it? Feeling good and loving it?

For some it can feel downright miserable.

It may be odd because everything in your life is fine, but you still feel miserable.

If you were to write down everything that you wanted in life, you’ve pretty much got it.

So why are you feeling so fed-up?

And it can be anything on the scale from fed-up to downright miserable and even depressed.

It’s such a mystery.

Could it be your expectations versus your reality aren’t aligned?

Your reality is great but your expectations of what your reality should be are even greater.

Is it that goal posts keep moving?

Or more to the point, you’ve gone past the goal post.

Your goals have been achieved and so there’s a sense of bewilderment, or loss, in not aiming towards something anymore.

Something that I think is very relevant when we reach our 50’s is this:

We’ve spent our lives up to this point, on an upward trajectory. We’ve been running through life like a thing possessed in order to get there. As well as to have a good time along the way, in order to secure our future. In order to make sure we can enjoy our later lives.

Feather the nest while we’ve still got the energy!

And that’s a reasonable way to work it isn’t it?

The younger we are, the more energy we can expend and STILL have some left to have a good time.

The older we get it tends to be one or the other. Expending energy on work OR on having a good time!

And this isn’t necessarily to do with physical energy as much as to do with inclination.

We enjoy more leisurely pursuits than we did when we were younger. We can savour the splendour of watching nature; going for a walk.

When we were younger, it was good too then, but it did need to be followed by something to get the adrenaline going. Going to a club, or a concert, or doing bungy jump!

So it’s not necessarily all about having the energy or not, as much as the inclination.

So you’ve been working really hard all your life either in employment, running your own business, running the house and family.

It’s a bit of a transition period for many of us.

It’s almost as if we’ve reached a plateau.

We don’t want to be climbing up the ladder of success or achievement anymore, but we’re not quite ready for pipe and slippers.

So this stage can feel a bit like being in limbo. Which can be disconcerting.

It’s almost as though it’s a subconscious change of direction.

And because it’s subconscious we don’t have a plan as such, we just sort of fall into it.

We end up with a lot of ‘shoulds’ going on.

I should be trying harder.

I should be doing more

Or maybe, I should be taking it easier.

There are lots of other reasons why being in your 50’s can make you feel out of sorts.

All those things that you were going to do one day. Swim with dolphins, learn to play the ukulele, grow your own veg, write a book. I’m going to do that one day.

You suddenly realise that this is that day. This is that ‘day’ when you’re going to do stuff. And that can strike lots of funny chords within us.

It may be that you assumed you would be in a certain situation by this time of your life and you find you’re not.

You thought you’d be looking at early retirement but that hasn’t panned out quite as you thought.

You thought you’d be settled in a lovely relationship but the time has flown and you never got around to that.

You thought you’d be celebrating that the kids have left home but either they haven’t yet, or they have and rather than it feeling liberating, it’s left a big hole.

You may have taken your eye off the ball with your fitness. Now it seems like a massive uphill struggle to get yourself back into shape. The magazines tell you it’s harder when you’re older so phew, not sure I can do it.

So if you’re feeling a bit out of sorts. Or even unhappy about having reached your fifties, have a think about why that is.

The assumption might simply be ‘Oh I’m getting old.’

But being in our fifties isn’t old!

50 is the new…… well I don’t know, but 50 isn’t what it used to be. Think about when you look back at photos of our grandparents time.

You could see when a woman was in her 20’s but very often by the time they were 30 it was hard to distinguish them from women who were twice their age. They dressed the same, acted the same, age meant different things then.

In todays society, we can go and learn pole dancing at 50!

It’s the beginning of a new era in our lives.

I think it’s fantastic! Each decade brings new joys. Look out for those joys rather than being obsessed by any negatives.

So as I was saying, if being in your 50’s leaves you feeling not as good as you could do, think about why, specifically, you’re not feeling good.

You may find that the reason isn’t a negative as such but just something you hadn’t thought of.

Look at what changes have taken place in your life over the last few years and see whether maybe you haven’t adjusted to accept these things yet.

Conversely look at what is still the same that you had assumed would change or had wanted to change and never got around to it.

In these instances it may simply be a case of making a small change or decision to incorporate a change you would like, or tweaking your day to day life to accept a change that you HAVE made.

Today is the first day of the rest of your life so let’s make it the best we can going forwards.

If you need any help with any of this then please do get in touch and we can have a chat about it, otherwise I wish you all the best in tweaking your life to being an amazing one!